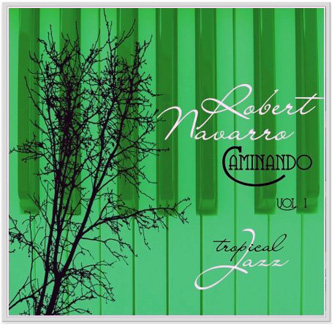 Pianist Robert Navarro’s Latin Jazz Ensemble, comprised of percussionist Richard Bravo, bassists Jerry Bravo, and violinist Pedro Alfonso, is a band adept at creating hot Latin beats fused with timeless jazz standards and new, innovative sounds. This new album is the summation of a year in the road. The concept of this album was specifically oriented toward blending classic Latin rhythms and jazz in a genuine and convincing manner.

The album features eight well-know standards and an original composition by Navarro. The album presents arrangements ranging in styles from virtuosic up-tempo Latin, R&B, jazz waltz and funk to pensive, rhapsodic jazz/classical ballads. The release continues Navarro’s plan to deliver a follow up recording of additional original compositions in Volume 2.

ABOUT ROBERT NAVARRO
On December 2007 he received a Grammy as an arranger with Bobby Cruz Romanticos de Ayer, Hoy y Siempre Song Envidia. In April 2011 he received an award from the Treasure Coast International Film Festival for the musical arrangement of the song City within a Dream for Best Original Song in a Motion Picture.

We seek to conserve our musical legacy, to serve our community, and create a vibrant future for our students through an intense and dedicated musical education.